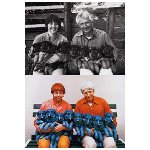 Have you ever looked at another’s work and thought it was yours? If so, you may have angrily asked yourself, “can they get away with this?”

Here is some guidance. In a nutshell, to show infringement, you need to prove that the alleged infringer actually copied your work and that the copy is substantially similar to yours.

Assuming access, you can establish copying through a side-by-side comparison of the infringer’s work and yours. In making that comparison the court looks at all the elements in each work, including those taken from the public domain. If there is copying, a court then focuses on whether the works are substantially similar. Here the focus is narrower. The court excludes all public domain elements from its analysis and looks only at those elements that are protectible.

In determining the protectible elements, a court will distinguish between the idea underlying your work and its expression. Only the expression is protectible. The distinction between idea and expression is often elusive. Two cases, Rogers v. Koons and Psihoyos v. McCann Erickson , help explain the distinction.  In Rogers , the photographer, Art Rogers, created a wonderful photo of eight puppies sitting on a bench. 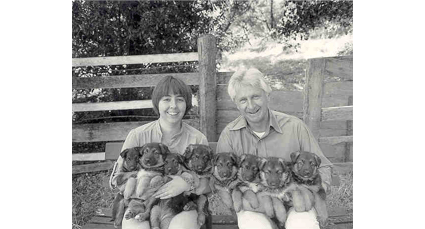 Jeff Koons, a well-known sculptor, had an Italian craftsman simply copy the photo producing the following: 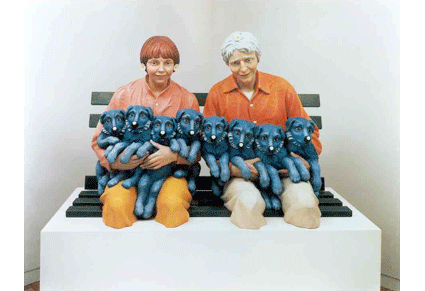 It is not therefore the idea of a couple with eight small puppies seated on a bench that is protected, but rather Roger’s expression of this idea—as caught in the placement, in the particular light and in the expressions of the subjects–that gives the photograph its charming and unique character, that is to say, makes it original and copyrightable.

In the second case, Mr. Psihoyos created a photo called 500 TVs (below). It depicts a model in the center of a dark room looking at a wall of 500 TV screens arranged in a parabola around him. The model is dressed in business casual clothes and sits in an office chair in a relaxed, contemplative pose with his legs crossed and hands behind his head. His silhouette is illuminated by blue light emanating from the monitors. Each TV screen displays a different still image. 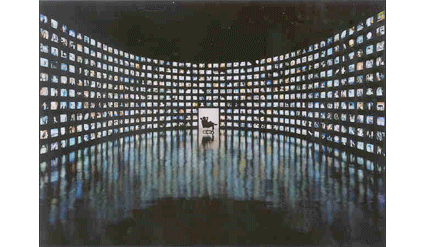 Thereafter, McCann Erickson, the ad agency, created an ad for Microsoft promoting the launch of one of its software programs. The ad included a photo containing many elements similar to those in Mr. Psihoyos’ photograph. 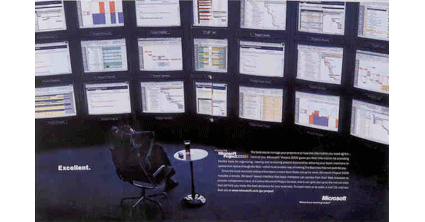 Mr. Psihoyos also argued that there were a number of elements in his photo that McCann had copied and that the idea and expression underlying each was the same. The idea behind both photos was to present a confident person in control of multiple streams of information. Mr. Psihoyos argued the expression was also the same because each photo:

A. Depicts the model in the same relaxed pose sitting with hands behind his head and legs crossed facing a bank of monitors arranged in a parabola;

B. Shows the model similarly dressed, sitting in a similar office chair;

D. Has a similar raised perspective with the viewer looking down at the model and monitors;

E. Presents a horizontal composition that focuses the viewer’s eye towards the banks of monitors;

F. Places the model in the center of the photo, a few feet in front of the monitors.

Defense counsel argued that a photo of a person in a ”control room” facing a bank of monitors was commonplace and therefore not protectible. That counsel creatively presented the court a videotape of similar scenes from various media, including the Simpsons TV show, showing some of the same elements present in Mr. Psihoyos’ photo.

Although the Rogers and Psihoyos cases were resolved on a confidential basis, they highlight the questions you should ask yourself next time you see a work that looks like it might be yours. The questions are:

1. Is there access? Did the potential defendant have a reasonable opportunity to see your work? Unless you establish access, you cannot show infringement.

2. Is there copying? Do a side-by-side comparison. Count the elements in your work that are also present in the similar work. Although there is no minimum number, are there a fair number of common elements?

3. Is there substantial similarity? What was the idea underlying your photo and how have you expressed it? Has the infringer copied your expression, not simply your idea? Compare the protectible elements. These elements include placement of the subjects, their poses and expression, perspective, composition, lighting, film, color and layout.  Have you and the infringer similarly expressed a number of these elements?

In sum, if there is access, copying and substantial similarity, there may well be infringement.